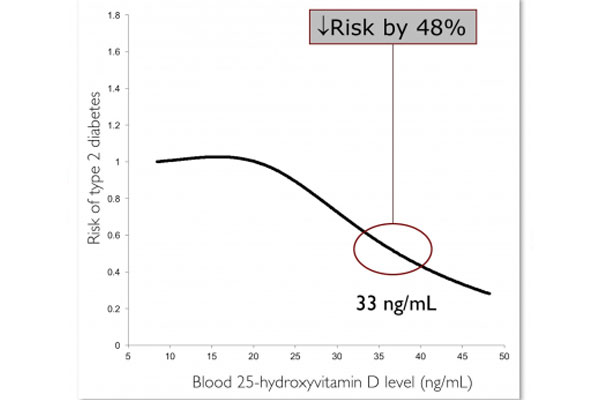 An observational study in the Nurses’ Health Study – a longitudinal cohort of women – supports an association between higher blood level of vitamin D and lower risk of developing diabetes. After adjusting for many factors known to influence diabetes risk – including obesity – our team reported that higher blood level of 25-hydroxyvitamin D was associated with a lower risk of future diabetes among women free of diabetes at baseline. Specifically, women in the top quartile of blood 25-hydroxyvitamin D level (mean level of 33 ng/mL) had a 48% lower risk of developing diabetes compared to women in the bottom quartile (mean level of 14 ng/mL). The benefit was larger among overweight/obese vs. normal weight women. Because of the observational nature of the study, we cautioned that a causal association between vitamin D and diabetes risk needs to be needs to be confirmed in a properly designed and conducted clinical trial.

Results were published in Diabetes Care.